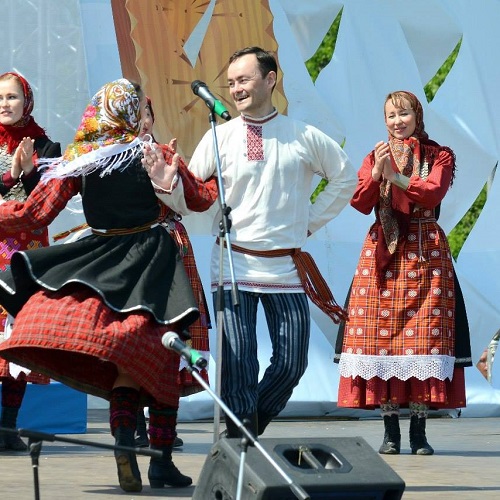 Udmurtian dances are full of small ornamentation and combinations of steps, they offer joy to beginners and challenge more experienced dancers.

Ekton Korka (Dance House) was founded in 1997 alongside the Hungarian dance house (Táncház) movement. In the beginning this meant a simply a dance club in the Iževsk cultural centre but was soon formed into a dance ensemble of the same name. Ekton Korka was created to oppose the soviet-promoted decorative folk culture, instead valuing authentic dance, music and clothing.

The ensembles leader Andrey Prokopjev brings along one musician and one dancer. The Udmurts teach their dances in a workshop and also participate in a seminar focused on the history of the dance house movement – how it all began, how Udmurtia became a part of the movement, how dance houses function in Hungary and how Estonia’s dance club tradition fits in with all of the above. Teacher Andey Prokopjev is valued as a choreographer and dance teacher both in Udmurtia and abroad. He has visited Estonia several times before with Ekton Korka.

Brought to you by Non-Profit Organisation Fenno-Ugria