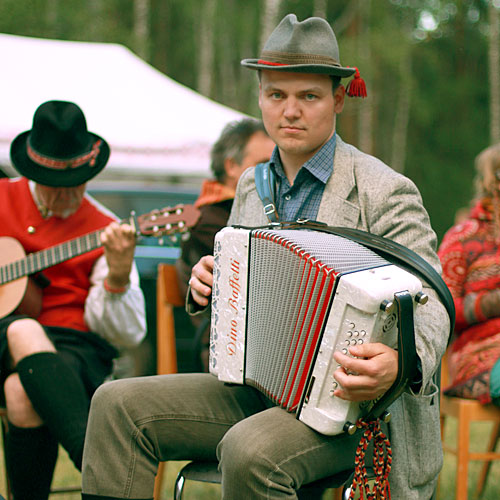 Jaan has grown to love traditional music and dance since his early childhood. He was brought up in Sarv family where both his parents – Õie and Ain – have been leaders of traditional music scene. Several songs, especially songs for dance he has learnt later mostly from Lauri Õunapuu. Seto dances and tunes from other finno-ugric nations are important for him for he has Seto roots.

Jaan is one of these people that you can find both playing music and dancing in one event, often also singing in the same time. He is passionate ringleader of Sabatants festival and Tallinn dance club and has visited several dance clubs and festivals constantly over 12 years in Estonia and elsewhere. Being simultaneously a dancer and a musician he knows how important it is to play danceable and reckon with dancers. Biggest joy for Jaan is to make a full hall of people dance to his garmoshka. He will play mostly widely known Estonian dance club tunes and some favourite dances collected from other countries.